I have hesitated from posting this third post on clip-less pedals, mostly for the risk of appearing to be a total fool - or at best the most indecisive cyclist in Britain and maybe the world.

But then it occurred to me  that if I was honest, at least it will help others by reading my ongoing narrative - and yes I do believe it is an ongoing narrative as there is yet one more type of pedals to try out.So in my previous two posts (Post1- Post2) on pedals, the story took us from the world of flat pedals to SPD's (mountain bike pedals). Not to be confused with SPD-SL's which are road pedals by Shimano.

In order to help out the confused I think a few illustrative pictures will help make the above more clear.

These are SPD pedals and cleats

Now we are all on the same page as to what I am talking about, let's have a look at the pro's and con's of SPD pedals. Well they are clip-less which is an advantage in itself, but I suppose the main advantage of this clip-less system lies with the cycle shoes you can wear - basically shoes for SPD pedals have the cleat recessed within the tread of the sole - therefore they are more useful for walking about on. Now this is a major advantage if you are doing cyclocross or mountain biking where you might have to carry your bike up some mountain or muddy hill but I personally don't find myself doing these things - ever!

So fantastic you can walk around in your cycling shoes – this is the story I bought into, as a rule I was using my bike for commuting and I needed to walk to and from where the bike was parked to the office, very quickly I discovered though, I was riding my bike far more than walking to and from it.

Initially I had bought the SPD pedals in the first picture, as I reasoned that I needed a platform just in case I wanted to ride my bike with normal shoes. The truth is that those occasions were rare to none and that the platform pedals are very heavy. So in an effort to remedy this I bought a second pair of lighter SPD pedals (as per the second picture). They were 60% the weight of the first pedals and they were still easy enough to do short distances on (on the rare occasions when I needed to) in normal shoes. So lesson number one – don’t get hung up on needing a platform, really think about how often you are going to cycle around in normal shoes and realise that even a minimal platform will be fine for the few occasional miles in normal shoes.

About a year ago I built a new go faster (read penile replacement) full carbon road bike LINK. As this was an out an out road bike – I reasoned that it really wasn’t the done thing to have SPD pedals on it (despite my purchase of a lighter set of SPD pedals). I faced the reality that it was time to go for road pedals and shoes. The reasons were primarily vanity in making sure my road bike fitted in with convention but also on a more pragmatic side – I could get far lighter pedals and also I was not that happy with my SPD shoes. I was getting foot ache often in my right foot, basically I think my shoes were too narrow for my slightly wide foot. As I was going to need to buy new shoes, now seemed as good as time as any to make the switch – besides I reasoned that I could keep my old pedals on my commuter bike along with my uncomfortable shoes.

But what pedals to go for? For me there were three main types to consider. SPD-SL (Shimano pedals), LOOK pedals, or Time pedals.

In the end I went for the Look pedals. All three pedal types use different cleats but they all fit into the same road shoes. To be honest there are going to be as many different views as to what are the best pedals – I just went with the LOOK ones. I liked their lightness and I liked the variable float cleats you could buy. Each brand has various pedals at different price ranges – just go with what you prefer.

In order to illustrate the difference – here are some more helpful images:

To go with my new pedals I needed new shoes – I went for these rather natty shoes “Sidi Genius 5 Pro/Fit Road”. So here comes the revelation! These shoes are just way more comfortable than SPD’s (I realise that this is somewhat personal). 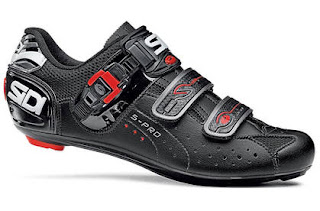 Sidi are a very well-known and trusted brand, but more than this, road shoes are designed for being comfortable on the bike not for walking in, they are also generally lighter. Additionally road cleats have a bigger platform and you just get a better spread of weight on your foot, now all this may not be that noticeable on a short ride - but start going over 50 miles and you are really going to feel the difference. Most notably, after riding on the new LOOK pedals for a month or so I switched back to my old shoe / cleat combination and I found the exit / entry to be much more grabby – the Look cleats are just that more smooth to get in and out of as well as being more comfortable and lighter. Such is the improvement that I went out and bought a second pair of LOOK pedals and have put them on my commuter bike, all the previous SPD pedals have been sold on eBay but sadly the SPD shoes sit there languishing at the bottom of my wardrobe.

So where do we go from here? Well I do have one issue with the Look pedal / cleat combination and that is I can only get one sided pedals. You will have noticed that all my SPD pedals were dual sided, really this shouldn’t be a problem, but I am probably more poorly co-ordinated than most when it comes to pedals. I often have the situation of spinning around the pedals trying to get them the right way up, not a major problem on the weekend but on the commute with regular stopping and starting at the myriad of traffic lights and it becomes a bit of a burden, so I am considering – wait for it – Speedplay pedals!

Really I can’t justify the cost of Speedplay right now (they are the most expensive option) when in general I am really happy with the LOOK pedals – but I know all too well, that I will find a way to justify the change at some point.

Edit - Just a quick warning about the LOOK cleats – they are about as durable as warm margarine – be prepared to go through a couple of sets a year – I wear out the left cleat at twice the speed of the right as generally when I stop at traffic lights I put my left foot down, it is not a major thing as you can buy a new set for £12 but do not expect them to last like the metal SPD cleats.